We had a fabulous night with the Murder Mystery, it was really great to do something so different! Here is some feedback for you. Downloads are easy to access, it is a lot of printing to complete. Doing it again, I probably would order the box so it was all set up for us. The mini games were great, like the ice breakers and between round activities, this was really helpful to get groups mixing together! All up, it is a great night and really enjoyable for everybody! Thank you very much!

We held a Tracy Gang 1920s murder mystery party!! Best night we have had for ages. Everyone thanked us for a great time.

I received the box quickly and engaged a local member of the amateur dramatic society to run the event for us. Our presenter did a great job, he got into the part, came around and talked with each group (we were in four groups), he listened and gave subtle hints. There was only one couple who had participated in a murder mystery before but most of the guests were looking forward to it and really got into it. The game certainly brought out the will to win in a number of guests. It was a lot of fun and I think most of us would do it again. I thought all that was provided was really good and the hints on preparing were really good. 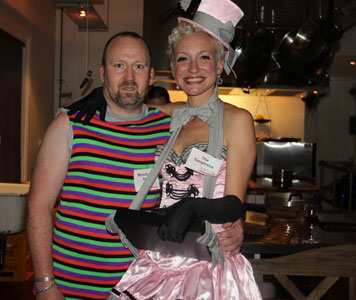 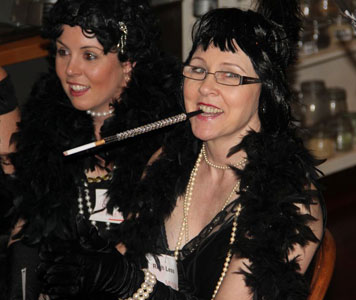 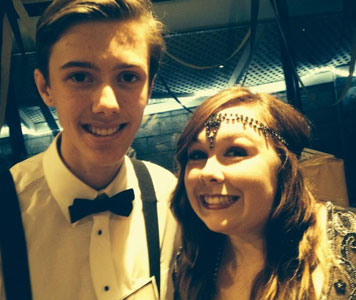 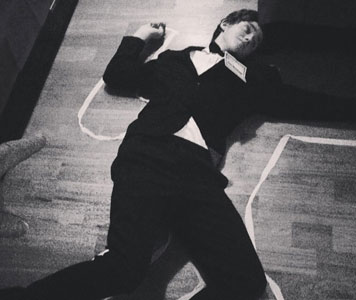 Story: "Aiden Abet" the leader of the Tracy Gang developed a scam that netted him $1m. However, once his victims caught on he became a hunted man. The $1m was hidden in the Tracy Speakeasy and when it strangely reappears it leads to murder! Unravel the mystery of the dead man walking, the letters from William Shakespeare and the literary weekend.

Adult Themes: Gambling, swindling, cards are a feature of the story.

How Do Costumes and Characters Work? To make the game as easy as possible to organise your guests do not need to dress as any particular character. The costume they wear does not affect the character they play in the murder mystery. You allocate the murder mystery characters on the night of the party. This means that if guests are sick and can't make it or extra friends want to come then there is no impact on running the game.

Note: The Mega Edition version for 120 to 300 people has a slightly different story line.

Do you have what it takes to be a member of the criminal underworld and the 1920s Tracy Gang?

What different types of games do you have?

The 1920s are remembered as the ‘Jazz era’ in Australia. Even ordinary families had access to radios and automobiles in the decade. Cinemas were the popular choice for entertainment; women had freedom of speech. Younger women were called ‘Flappers’ meaning ‘Modern Women’ embracing new fashion, short hair, dancing and smoking!

Why would a 1920s murder mystery party in Australia be awesome?

Australia has some of the most exquisite venues for having a Gatsby-style 1920s Murder Mystery Party. You can get back to the rip-roaring, jazz era - the 1920s by donning the flappers, striped clothes, and short hair. With greater flexibility of venue selection and availability of hosts, you can spice up your parties in just a snap of your finger.

What costumes should people wear to a 1920s party?

The roaring 20s were the times of new fashion and had a specific dress code for men and women. The women were usually dressed in frills & glitz, flappers, long strings of pearls, knee-length hems, headwear & footwear, and wearing their hair short. Men used to don suspenders, vests, and formal suits in plaid/pin-striped or striking solid colors with a classic haircut.

Food is where the fun begins! It’s a matter of personal preference. You have a wide range of food options to be served in a 1920s themed murder mystery party. You can serve deviled eggs, mixed nuts, olive platters, shrimp cocktails, cheese platters, or oyster Rockefeller.

How should I decorate my venue to look like the 1920s?

The best way to decorate your venue to look like the 1920s is to decorate it with pearls, feathers, champagne bottles, and sparkles. You can get decor ideas from the internet or click on the above game images.

Henry Ford brought a revolution in the car industry. He introduced techniques for the mass-production of automobiles. He made automobiles affordable for even ordinary families using his latest technology. He is known to provide thousand of jobs in the 1920s and became very successful.

What were the big events that happened across the world in the 1920s?

A lot of big events took placed worldwide in the 1920s. American women were given the right to vote, the league of the Nations was established, America endured the most terrifying economic depression in history, the mass media breathed its first breath, and much more!

Amusement parks and national parks were the USA’s top trending locations in the 1920s. The most famous attractions were the Hollywood Sign (erected in 1923), the Museum of Modern Art in New York, Luna Parks in Denver & Coney Island, the Grand Canyon, and Yellowstone National Park.

What were the big criminal gangs in the USA in the 1920s?

1920s were the peak times for gangs. Many gangs were operating worldwide, including the USA. Some of the big USA criminals were Al Capone, John Gotti, Bugsy Siegel, Tonny Accardo, and Paul Castellano.

What do I do now to organise my 1920s murder mystery party?

Oh, that’s simple and easy! Especially when you have us. First, you need to download the 1920s murder mystery game theme from our downloadable games section. Then you need to hire a host for your party. To hire a host in your area, please click the hire a host button above. You can also host the party yourself or ask a friend to run the game. Select a venue near your area or host the party at your home to save money. Get the venue decorations, costumes, and a menu for the game. Send out the invitations, and you are good to go!


Why are the 1920s such a popular choice for Murder Mystery parties?

The 1920s is when trains, planes and automobiles began to come of age. While the 1800s saw a lot of their mysteries set on trains, the rise of the personal automobile led to a lot of the news items in the 1920s. Gangsters started doing drive-bys. Airplanes began to be in use for high powered executives. The train continued to be a popular choice of transportation. Rather than just set your Murder Mystery Darwin Northern Territory party in the 20s, get specific. You can stage your event as if it were in a 20s bank or airport. Think Casablanca and the era that occurred after World War I and before the next Great War. There was intrigue everywhere and it was transportation that made it all possible. You can even stage a murder mystery on a hiking trail or in a park, it is made all the more spectacular because in that era - where you were at the time was where you were. There was far less cross-over of locations so you could really capitalise on an inexpensive outdoor location.

Imagine that your party is arriving by motorcar and part of your Murder Mystery Perth Western Australia event is having their motorcade blocked on the rode by two people - gangster and moll - who have become stranded. While you stop to help, not only does a murder occur, but the cars are mysteriously disabled. You are left to all walk to the next down to try and find a phone. As you walk, even more mystery happens.

Let your ideas come to life

There are a lot of things you can with your Murder Mystery Darwin Northern Territory party that will make it unusual and unique. Using the idea of the motorcade rescue, you can throw a party that also in introducing new co-workers or neighbours to the area. By setting up clues around town, everyone will see more of it. This is an ideal way to create a bond, and let new people become more comfortable with their surroundings. Throw in a murder or two, and then end it with a great dinner and you have the perfect recipe for an ice-breaker event.

Find out what you can do

To find out what you can really do for your Murder Mystery Sydney New South Wales party you should talk with one of our professional consultants. We have been staging murders all over town and you can use our specialised knowledge about what it takes to make a good mystery party even better. We'll explain the key elements, provide costumes and oversee the pacing and delivery of the mystery. Once we know what you want to do, we can work to make your idea a reality. Hosting a murder mystery can be the best way to introduce yourself, or to take new people in and let them get to know the area and people better. It certainly beats leaving a pound cake on the step.