Instead of the same old dull Christmas party where people eat snacks, drink cocktails and talk about boring work stuff, you could have a murder mystery party to liven up the night. Your guests could dress as characters from the murder mystery party game, which takes place at Santa's workshop at the North Pole. Someone could portray Santa, while others dress as elves, toys, reindeer or snowmen.

Hi Team, I just wanted to say a HUGE thank you for Saturday night. All my friends had a blast of a time & everyone commented how good the game and the host was. The night wouldn't have run so smoothly without your company. I hope you had just as much fun as what we did & a few people have commented to me to have another party. I hope to be contacting you again in the near future for the next party, even those who complained about dressing up, had a ball. Thanks again. 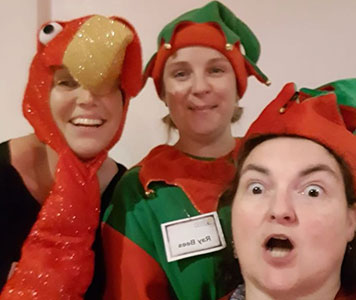 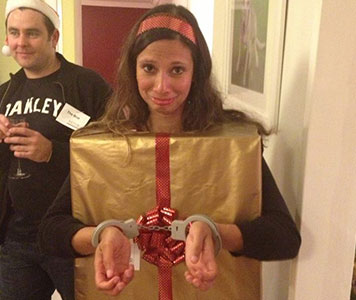 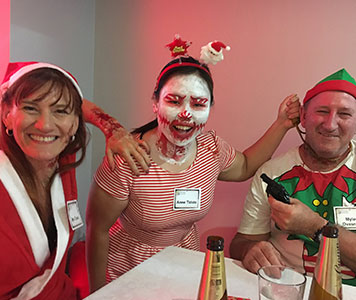 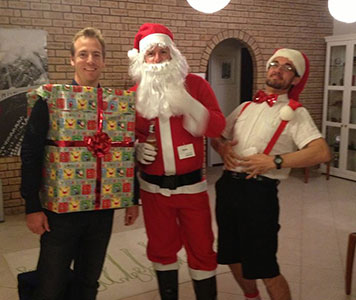 Story: Santa is working hard to produce toys for the kids at Christmas.  Sounds nice doesn't it?  However former disgruntled employees including elves and dwarves keep trying to get in the way.  Poison, explosions, backstabbing and betrayal are all part of the fun.

How Do Costumes and Characters Work? To make the game as easy as possible to organise, your guests do not need to dress as any particular character. The costume they wear does not affect the character they play in the murder mystery. You allocate the murder mystery characters on the night of the party. This means that if guests are sick and can't make it or extra friends want to come then there is no impact on running the game.

Will you survive an icy winter in the North Pole?

What different types of games do you have?


Christmas is a time to celebrate. It has been a long year and just like Santa's elves your staff have been working hard. It is time for a dinner, some drinks and a party on the boss.

The end of the work year and a time to let your hair down. The corporate rules and procedures have produced a successful year but you have to let the staff vent and have an outlet for all the annoying customers and others you have had to deal with over the year. You can't put your customers onto Santa's naughty list so what can you do?

Why not do something new this year.

Hold a murder mystery party as a part of your Christmas celebration.

A Christmas Capers murder mystery party is a great idea. It will provide a fun and structured way for your staff to let off steam, have a laugh and really enjoy themselves at the end of a frantic year.

You can build the team and celebrate the year at the same time.

Host a Murder Mystery Game for the Office Christmas Party

If you are in charge of planning your office’s Christmas party and want something different than the typical banquet and cocktails, consider throwing a murder mystery party. Murder mystery party games would be a fun way for you and your co-workers to interact instead of just sitting around eating, drinking and talking.

Playing a murder mystery party game would give everyone in your office a chance to dress up as the characters in the game. While there is a themed Christmas murder mystery game, you could choose from the Hollywood Scandal game and party goers could dress up as their favourite actors or actresses.

To go along with the game, tuxedos and long gowns could be the attire of the evening. A red carpet could be laid out in front of the entrance that leads to the party and a photographer could be hired to take pictures, just as the paparazzi would at a Hollywood event. If the Hollywood theme is too formal, then you can pick from several other murder mystery party games for your Christmas party.

A Suitable Game for Large Crowds at your Christmas Party

No one has to be left out of the game when you order a murder mystery party game. You only need two players for the game, but you can purchase games for as many as 60 players or another edition will handle as many as 120 players. Everything you need to play the game is included. There are name badges, invitations for the party, a party guidebook, a pair of handcuffs, clues, sleuthing materials, decoration suggestions and more.

Who can Play the Game?

Anyone who likes to solve clues, play an interactive game or enjoys thrillers will enjoy being in the murder mystery party game. If there are older children attending your office Christmas party, they could participate as well. The game is suitable for children 11-years-old and up, so older kids can have fun with the game as well.

If you prefer, you could set up a mystery game for the older kids in another room and leave the main game for the adults attending the party.

Hiring a host will cost a bit extra, however, most office parties have a budget and you could use part of the party budget on a host as well as a caterer.

Where to Play the Murder Mystery Christmas Game

Selecting a venue will depend on how many people will be playing the game. Be sure to RSVP in time to hire a venue, especially around the Christmas season. If you are going to have a large group of players, you may wish to hire a conference room at a hotel or a banquet room at a restaurant to hold your murder mystery party game.

On Saturday 9 July 2016 we celebrated Christmas in July at Peel Manor House. The venue wanted to do something different though so they organised a murder mystery party as a part of their Christmas in July celebrations. The idea was a huge success because the event was Sold Out and some people had to miss out.

Peel Manor House was beautifully set up with candles, Christmas decorations, Christmas trees and much more.

The guests went to great efforts and were all dressed up for their Christmas in July murder mystery party. We had elves, pixies, fairies, reindeer and of course the man himself Santa Claus and the lovely Mrs Claus.

Dinner was a 3 course buffet including entree, mains and dessert.

The murder occurred at about 8pm. "Candy Cane" who was actually attending as a part of her hen's night was the poor victim that met a foul end due to cyanide poisoning. I wonder if she had any idea she would be murdered on her hen's night?

Each table at the event formed a team and the teams had to work together to solve the crime.

The sleuthing is the best part of the Christmas in July murder mystery game. Participants move around the room with clues, mingling and talking to other guests in an attempt to gather vital information.

Throughout the night guests made lots of accusations aimed at the other characters. People were accused of murder, theft, blackmail and other forms of foul play.

At the end of the Christmas party when all the clues were out, guests told their final story. The host revealed the true story of what happened to Candy Cane (our hen victim) and the winner was announced.

The winners won a beautiful bottle of wine supplied by Peel Manor House and were quite chuffed indeed.

Overall the night was a sell out and a huge success. After the murder mystery party the guests continued to party on the dancefloor until midnight. The end result of our Christmas in July murder mystery party was a lot of fun and we did find justice for poor old Candy Cane!

If you think you would like a murder mystery party for your next Christmas in July then click one of the images below for more information.