Love ghosts and ghouls? Then this is the murder mystery party for you. Set in Nosferatu's castle you will love the amazing costumes your friends arrive in. Glass of blood anyone?

Such a great night. Everyone dressed up so well and I am really glad I organised a professional photographer. 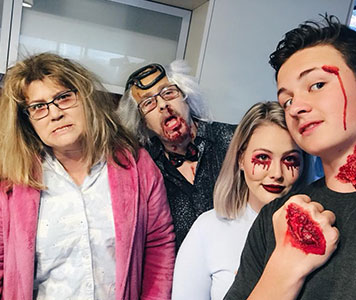 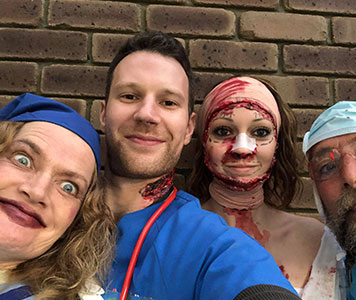 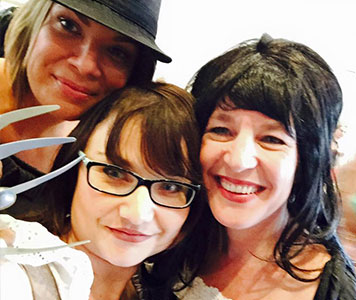 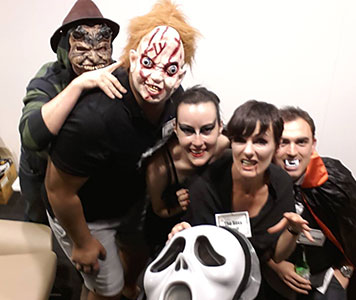 Setting: A night in Nosferatu's Castle.

Story: Set in Dracula's Castle our ghosts, goblins and hobgoblins just can't keep their hands to themselves.  Lies, blackmail, secret affairs, mystery disappearances are just the beginning as this devilish, tortuous and dastardly night of murder unfolds.  You will be sacrificed to scandal and mayhem as you and your fellow ghouls unravel a twisted tangle of undead madness to ultimately be crowned the most vivacious vampires in Transylvania.

Costumes: Guests come as their favourite ghost, ghoul or other undead character.

How Do Costumes and Characters Work? To make the game as easy as possible to organise, your guests do not need to dress as any particular character. The costume they wear does not affect the character they play in the murder mystery. You allocate the murder mystery characters on the night of the party. This means that if guests are sick and can't make it or extra friends want to come then there is no impact on running the game.

Will you survive a night in Nosferatu's Castle?

Halloween is an incredibly unique time of year, making your dress-up options practically endless. If you're a fun-loving trendsetter who likes to stand out in a crowd, you could dress up as Count Dracula or the Joker, or even a skeleton. The key to a truly terrifying costume is not to compromise on anything - make sure you have alarming makeup, fake blood and a convincing dress-up to wear. If you'd prefer not to stand out but still want to dress up, consider dropping blood on some old clothes and putting talcum powder on your face to make you look like a ghost. You could even dress it up with white contact lenses! If you're still struggling for ideas, visit your local costume hire shop or website and look through what they have on offer.

Whether you're hosting a Halloween party or just decorating your home for trick-or-treaters, decorating for Halloween is a great way to get you and your guests into the mood for this time of year. Make the inside of your house fearsome with hanging sheets that blow in the wind, fluffy string cotton draped around like cobwebs, and terrifying jack-o-lanterns with glowing orange eyes and creepy smiles. Make sure to turn off most of the lights and close the curtains - the darker it is, the scarier it will be! Outside your house, you can scatter more jack-o-lanterns and put signs up with scary messages like "Enter at your own risk" and "Danger, Paranormal Activity Detected!" Play creepy sounds from hidden speakers, such as screams, ghost noises or eerie music.

If you're serving food at Halloween, you can really let your creative juices flow. The key here is to make every dish theatrical - serve it in a cauldron, draw a cobweb on the plate, or decorate desserts with ghosts and demons. If you're just serving finger food for trick-or-treaters or for a small gathering, try some spicy salsa served with veggies chopped into spiky shapes like teeth and fangs, or a dip like hummus with a spider's web drawn on top in ketchup. For sweets you could do small bowls of jelly with worm lollies crawling out of it. If you're hosting a full dinner party, try a soup served in a hollowed-out pumpkin with scary face pizzas or barbequed bats (using chicken wings as the bat wings) for main course, followed by ice cream cones served upside down and decorated like witches hats, or meringues shaped like ghosts. The options here are infinite, just take any dish you love and serve it with fake spiders and ants crawling all over it!

Get in the Spirit of Halloween to Solve a Murder Mystery

If you are looking for a way to entertain kids too old for trick or treating on Halloween, murder mystery party games Adelaide, South Australia may be the way to go. Instead of awkwardly standing around in clusters separated by gender, the party can liven up the night with fun and laughter as the teens try to solve a murder mystery. They can even get into the spirit of the occasion and dress up as characters in the game.

A Perfect Mystery for Halloween

The murder mystery party games come in several editions, but there is one perfect for the Halloween season called Haunted Horrors. The mystery takes place in Dracula's castle, so partygoers can dress up as vampires, ghosts, goblins, zombies or any other creature of the night.

There are two editions of this game, one with the materials for up to 60 guests and a second one that will accommodate 120 guests. To add to the fun, you can decorate the room you are playing in like a haunted castle and serve spooky looking snacks for the party participants.

Appropriate Mystery Games for Almost Anyone

The Haunted Horrors game would be great for teenagers and adults alike, so the game could be hosted by a church who might wish to help parents keep their teenagers occupied while they are taking their little ones trick or treating.

Along with Haunted Horrors, there are several other versions of the murder mystery party games. If you think the scary vampire scenario may be too much for your group, you can order a Wild West themed murder mystery or there is a Caribbean cruise theme that could be used for Halloween as well. Guests can dress up as pirates, ghosts, sailors or cruise passengers for this version of the game.

If you want to participate in the party instead of hosting it, you can choose to hire a host to help you with the festivities. There are hosts available in most areas of Australia, including South Australia. The hosts can help keep guests entertained, ensure that everyone knows what they are doing and make sure everyone has a part to play in the mystery.

Along with hosts, you can even find suggestions for venues to rent if your home isn't large enough for your Halloween party. A banquet room in a restaurant or a hotel could be great places to hold a murder mystery party if you have a large group of partygoers. You will want a spot that is fairly quiet and isolated so you can have fun with your party without interference from other people or groups.

Halloween is for Adults Too

The murder mystery party games are great for adults to play as well, so you can host a party for your work colleagues, a church group or a group of friends and family. It will give the adults an excuse to dress up for the night and pretend to be someone else as they try to solve a murder mystery.

The Halloween tradition began in Western Europe, where the Celtic people had a festival called Samhain (named after the god of the dead) on November 1st. This was to mark the transition from the season of light into the season of darkness at the end of the summer harvest when all the crop was stored for winter. On October 31st, the night before Samhain, the Celtic priests known as Druids would gather in the forest and light huge fires, offering crops and animals as sacrifices to ward of evil spirits and honour the gods. When the Romans invaded the Celtic land, they integrated their own traditions of Pomona Day with Samhain, which they celebrated around the same time. The Roman traditions brought apples, nuts and harvest traditions as well as magic and evil spirits into the festivities around this time of year. When Britain became Catholic, the church made November 1st a holiday called All Hallow's Day as a time to honour the dead with ghosts, skeletons and skulls. Over time, October 31st eventually became known as Hallow's Eve and then as Hallowe'en, which today is known simply as Halloween in Western culture. Countries all over the world celebrate similar traditions such as Fiesta de los Muertos in Mexico, when families have picnics in cemeteries and decorate their relatives' graves, or Diwali in India, which is celebrated by lighting candles and oil lamps.

Today, trick-or-treating is known as the custom of going door to door in your neighbourhood asking for 'treats'. In some cultures, trick-or-treaters will threaten mischief if they do not receive the treat they demand. Among the Celts, the end of the harvest was the time the workers got paid and were expected to pay rent, and hence it was common in Ireland to go knocking door to door collecting money and food such as bread, cakes, nuts and apples. The Irish believed that spirits such as fairies or 'little people' came out to play on the night of Halloween, and that if they didn't give what the door knockers asked for they would be haunted by a trickster spirit. When the Irish and Scottish migrated around the world, their traditions went with them. Today, trick or treating is celebrated more in the United States than it is anywhere else.

Bobbing for apples - The history of this game goes back to ancient Halloween fertility rites. According to tradition, all unmarried participants in the game would mark an apple with a knife to identify it as their own. Apples were then placed in a barrel of water with several unmarked apples and each person would try and catch a floating apple using only their mouth. The mark made on the apple would then tell the person who would be their future husband or wife. These days variants of the game exist where apples are tied to a string and hung in a row - participants must stand under the apple and try to take bites from it using only their mouths. This game is also played with sugary doughnuts and marshmallows.

Musical Graves - This is played like musical chairs, but instead of chairs there are gravestones lying face up on the ground, and instead of dancing everyone walks around like zombies. Have one less grave than there are participants. Play some spooky music while everyone walks around and when the music stops everyone must find a grave and lie down on it. The player who can't find a grave in time is out and another grave is removed for the next round. Keep playing until only one winner remains!